My name is Randolph West, and I am an actor, filmmaker, musician, author, and technologist based in Calgary, Alberta, Canada. If you’re looking for my blogs, click here for personal, and here for SQL Server. 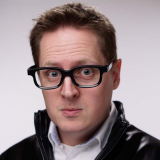 Here’s a link to my IMDb page, my actor reel, and my voice reel.

I’m part of the Voice Acting Power Squad, and before the pandemic hit, we met every Monday and live streamed on Twitch and Facebook.

In Johannesburg I was heavily involved with Franklin Players. In Calgary I’ve appeared on stage with Morpheus Theatre, and directed for the stage with Confederation Theatre.

This is an incomplete list of things I’ve done for the camera:

I have written some free stuff that you can see at GitHub. I also write software in C# and Visual Basic.

I sit on the boards of several companies in Canada and South Africa, designing and building systems for companies you’ve never heard of.

I have co-authored four books so far. I have also contributed to numerous publications over the years.

I love music of almost all genres, and I’ve often been heard saying there are at least two songs from any popular performer that I like.

Between 2016 and 2018 I started playing with Garage Band loops, and eventually composed some tracks that are available on SoundCloud. I’d personally classify these under Electronic Dance Music (EDM), but there are trance, house, and other influences in there.

Additionally, I have released a single called Turkish Lick, which you’ll find on iTunes / Apple Music, Spotify and various other places.

In the 1990s, people visited this site for my Humour page. For a while I was known for a Windows-based application called ShutOff 2000. I also created South Africa’s first short URL generator, several months before Twitter was invented.